Samsung Galaxy S7 vs Iphone 7: Which is better?

The comparison between iPhone 7 and Samsung Galaxy S7 is not for the promotion of one over the other, rather, the purpose is to create a certain kind of awareness.

With this in mind, we shall, therefore, begin with the comparison between iPhone 7 and galaxy S7.

It has always been the nature of Samsung to standout in the display department. The Galaxy S7 features a rich, colourful 5.1-inch Super AMOLED display that puts other Android phones to shame.

Also, its high-resolution 1,440 x 2,560-pixel screen offers a ludicrous 577 PPI pixel density. Also worth a mention is the fact that you’re getting a solid 72.1% screen-to-body ratio – bezels are kept to a minimum.

Another key feature of the Galaxy S7 screen is its protection. The display comes coated in Corning’s Gorilla Glass 4, which should help it to survive drops. That said, this reporter’s Galaxy S7 has already suffered cracked on a number of occasions, in spite of Corning’s best efforts.

On the other hand, Apple has once again kitted out the iPhone 7 with its trusty Retina HD display, which measures 4.7 inches from corner to corner. So while you’re getting a lower resolution of 1,334 x 750 pixels compared to the hi-res Galaxy S7 display, it’s spread over a smaller area, so the disparity won’t be as noticeable as it would be on a 5.1-inch screen. 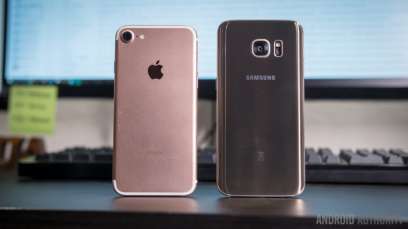 There is no year that Samsung will not manage to impress further with its camera. Before the launch of iPhone 7, the Galaxy S7 boasted the best snapper on the market; and after using the iPhone, we’d say it still does.

What really sets that 12-megapixel Galaxy S7 camera apart is the built-in dual pixel technology. Every pixel on the Galaxy S7’s image sensor has two photodiodes instead of one. The main advantage of this increased pixel count is the faster focus. When you’re taking a photo with an iPhone 6S, between 5% and 10% of the pixels are used for focusing. With the Galaxy S7, however, every single pixel is in play.

On the other hand, the iPhone 7 also has a formidable 12-megapixel camera. It has an improved six-element lens and a wider f/1.8 aperture, improved from f/2.2 on the iPhone 6S and almost matching the Galaxy S7. There’s also a new Quad LED flash that’s 50% brighter than the old one.

Both phone cameras are great, and a pleasure to shoot with. It’s a close-call as to which is better, and it varies depending on the shot you’re trying to take and the position in which you’re shooting. Sometimes the shot comes out better on the iPhone; at other times it’s on the Galaxy S7.

The Galaxy S7 appears to be the more reliable of the two, with the iPhone 7 often getting dynamic range mixed up when shooting lots of pictures in a row. The slightly wider aperture on Samsung’s handset also provides slightly better depth of field – but again, it’s close. 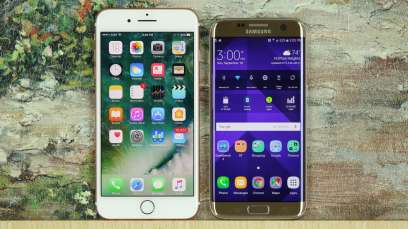 The Samsung Galaxy S7 runs on Google’s Android software, specifically Android 6.0.1 Marshmallow. It was the most recent version until Google announced Android 7.0 Nougat earlier this year. So until the S7 updates to Nougat, Marshmallow remains at the helms for now.

Marshmallow was actually an incremental update, adding small improvements such as UX redesigns and battery life optimisations. The previous Android 5.0 Lollipop update laid most of the groundwork, so Marshmallow was more of a cherry on the top. That means it’s very slick and refined.

On the other hand, The iPhone 7 runs on Apple’s custom-built iOS 10 software. The software is actually debuting on the handset, so the iPhone 7 has the advantage of having been designed entirely around running iOS 10.

iOS 10 is the tenth major release of the OS. It improves user experience by opening up 3D Touch support to developers and also offers a redesigned lock screen and support for widgets. Also included is a Maps redesign, a Home app for smart home functionality, and third-party app compatibility for Siri.

By and large, there’s no clear winner here. It boils down to personal preference. But both OSes are now at a point where they’re powerful in different ways. You’ll be happy, whichever way you go. 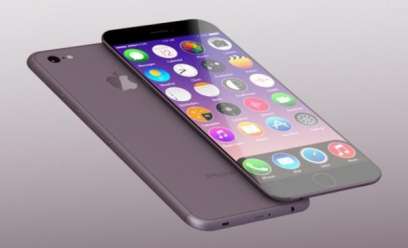 Here, this one is more or less like a walkover; and this is because the Samsung Galaxy S7 trounces the iPhone 7 when it comes to battery life.

The Samsung Galaxy S7 features a non-removable lithium-ion battery, with a cell capacity of 3,000mAh. That results in a talk-time of 22 hours, with 62 hours of music playback.

On the other hand, the iPhone 7 which also features a non-removable battery, lasts 2 hours longer than the outgoing iPhone 6S. That was Apple’s claim anyway.

But then, while the Samsung Galaxy S7 can easily make it through the day, the iPhone 7 is completely out of juice come the evening; that extra 2 hour is nowhere to be seen.

The poor battery life on the iPhone 7 is the single biggest reason we find it hard to recommend, so that’s another round in the bag for the Samsung Galaxy S7.

In conclusion, based on the outcome of their comparison, we can honestly say that the Samsung Galaxy S7 ranks higher than the iPhone 7.

This is a guest post by Ben Arinze. I blog at MyPhones where i focus on everything Android including how-to tips on how to efficiently make use of your Android device.