Nigeria is a beautiful country with many rising stars and talents. We are renowned for our food, movies, and music. Nigerian musicians like Wizkid, Fela, and Burna Boy have taken our music to an international scale. For this reason, Afrobeat and Afropop have reached great heights in the music world.

Since there’s a large market for our music, it translates to having more music talents on our radar. These musicians in Nigeria occupy different positions in the hearts of Nigerians. Therefore, fans always want to compare their favourite musicians to see better. Their net worths and wealth is an excellent part of this comparison. So, fans spend a lot of time searching the internet to know the Richest Musicians in Nigeria.

Well, that’s why we compiled the list of the top 11 richest musicians in Nigeria in 2021.

Based on personal research and discretion, I would be dropping a list of the Top Richest Musicians in Nigeria. This list aims to answer the following;

Tiwatope Savage Balogun is the wealthiest female musician in Nigeria. Throughout her music career, she has won awards and received love from Nigerians. The Nigeria-born Tiwa moved to London with her family at 11. Over there, she studied at Berklee College of Music and participated in the Uk X factor competition. After this, she was able to sign a record deal with Sony Music.

However, she became famous in Nigeria after joining Marvin records -owned by Don Jazzy. This amazing musician has won several awards and recognition. She has received a commendation from MTV Europe Music Awards -the first female to receive the Best African Act. With hard work and constant achievement, Tiwa Savage has amassed riches totalling at $5million

Enitimi Alfred Odum, popularly known as Timaya, is one of the richest musicians in Nigeria. This talented artist rose to stardom after releasing his debut single ‘Dem Mama’ in 2005. After this single, he has added several albums to his discography. Some of these albums include “True story”, “Gift and Grace”, and “De Rebirth”. As one of the richest musicians in Nigeria, Timaya has earned several headies awards. He has also worked with brands like Hennessy and Globacom. With all of these, Timaya’s net worth is approximately $8.5million.

One of the richest musicians in Nigeria is Don Jazzy. The Ajegunle-bred music star started his career by playing the guitar at age 12. After that, he moved to London, where he played the drums for his uncle’s local church.

Over the years, he has had numerous recordings, singles, EP and albums included. Moreover, Don Jazzy is also the owner of Marvins Record. Marvins record was founded in 2012 and has served as the label for stars like Tiwa Savage, Johnny Drille, Korede Bello, Ayra Starr, etc.

Like other celebrities on this list, he has received numerous awards and collaborated with many Top acts. Currently, Don Jazzy has a staggering net worth of $10million.

The debut single ” Eni Duro” is Olamide’s first hit song. He was signed under the Coded Tunes Record label when he released this song.

Following Eni Duro, Olamide has dropped several singles, EPs, and albums. However, he later established his record label known as Y.B.N.L. Under this label, he has signed and developed many Nigerians Top stars, like Lil Kesh, Adekunle Gold -Ag baby, Temmie Ovwasa, Lyta, Davolee, Chinko Ekun, and many more.

As one of the Richest Musicians in Nigeria, Olamide Net worth in 2021 is approximately $10.5million. As an extra point, he has also hosted shows, received awards, and collaborated with several African acts.

After the separation of Psquare, Peter Okoye is now known as Mr P. Mr P, has accumulated enormous riches during his career as part of Psquare. He has dropped many singles, albums, as well as collaborations. Peter Okoye also worked as a brand ambassador for Olympic, Adidas, Kia Motors, etc. He is currently associated with Merry bet. With all of these, he is now worth $12million.

Although D’banj keeps his personal affairs Private, he is estimated to be worth over 7 billion NGN – roughly $14billion. D’banj receives between $30k-$40k for his appearance in local shows. He has also built up his wealth from numerous ambassadorship deals received. He has worked with brands such as Globacom, Power Fist, and Virgin Colours. This famous musician also owns properties in Lekki, Lagos, London, and the USA.

Over the years, the duo singers Peter and Paul Okoye were regularly at the top of the list of Richest Musicians in Nigeria. These duo singers were known as “Psquare”. After their disbandment in 2017, the Identical Twins have, albeit individually, performed well.

Paul Okoye, a songwriter, artist, and vocalist, is now known by the stage name Rudeboy. Rudeboy has released several singles such as ” Fire Fire”, “Nkenji Keke”, and ” Reason with Me”. Rudeboy released Reason with me in 2019, which is currently the most viewed video on YouTube in Africa. With many investments, assets, and deals, Paul Okoye is worth $16million.

Davido is the son of Adedeji Adeleke- a wealthy mogul in Nigeria. Davido, whose real name is David Adeleke, is popularly referred to as O.B.O. This top African Act has a large fan base in Nigeria and a squad tagged as 30BG. 30BG has welcomed artists such as Mayorkun, Lil Frosh, Peruzzi, and some non-singers.

Davido has released several singles, albums, and collaborations. Nonetheless, with his awards and deals, the artist has proven himself. He has worked with Guinness, Infinix, AXE, and MTN. All-in-all, Davido is assessed with an impressive net worth of $16million.

Burna Boy is a popular household name in the music industry. He was raised in Portharcourt, Nigeria, and has steadily risen internationally. As a world-class musician, he’s widely recognised, respected, and loved for his unique singing style.

This superb African act has won several national and international awards, including All African Music Awards, VGMA, and Grammy Awards. With numerous deals with top brands and companies, he has accumulated a tremendous net worth of roughly $17million. His riches is why Burna boy got to #3 of the Richest Musicians in Nigeria.

With the debut single “African Queen”, 2face rose to international recognition. This uplifting soul song was released a few years after his separation from the plantashun boiz in 2004. After this song, 2face has continually made adverse progress in the Nigerian music industry.

Aside from music, the 46-year-old musician invests in Real estate. He has clubs and properties in Festac, Ikeja, and the Lagos Island areas of Lagos state. 2face, also known as 2baba or tuface Idibia, has hosted shows, signed deals, and won various awards during his active music years.

Currently, 2face Idibia has a net worth of approximately $22million.

No #1 on our list of Richest Musicians in Nigeria is;

#1 Richest Musician in Nigeria:Wizkid (Worth $30m)

With approximately 65 awards, Wizkid has received love and recognition from locals and foreigners. He has collaborated with top African and International acts such as Beyonce, Drake, Skepta, etc. His collaborations with Beyonce on “Brown Skin Girl” made him receive a grammy award. In addition, he was featured in the Guinness books of record because of his song with Drake, “One Dance”.

He also becomes the first Nigerian artist in history to simultaneously chart on the US’ Hot 100 and album chart as Essence (ft. Tems) make major strides.

Asides from these, Wizkid has worked hard to become the #1 Richest musician in Nigeria. He broke the record of being the first Nigerian to become an ambassador for Pepsi. With many deals, tracks and shows, Wizkid have steadily accrued a net worth of approximately $30million.

You can also read our article on Discover Several Things About Naira Marley, Including Net Worth

IInfluencers
Read More
When you visit Adegoke Pamilerin‘s personal website, you will see him call himself a humanitarian, a thought leader…
Read More
CCuriosity
Read More
The Nigerian music industry has seen a lot of prominent musicians rise in the last decade. They have…
Read More
MMusic
Read More
As far as music goes, Davido has really made a name for himself. He has gotten numerous nominations,…
Read More
IInfluencers 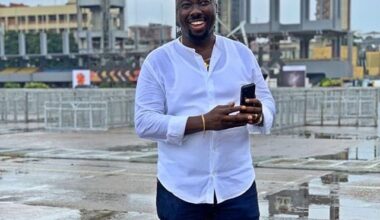 Read More
In this article, you would be learning all you need to know about Obi Cubana- The Nigerian mogul.…
Read More