The growth of mobile internet over the years has been nothing short of amazing, and we all expected this day to arrive.

Below you can find the snapshot of the world’s internet usage through October of this year and it is nothing but fantastic. 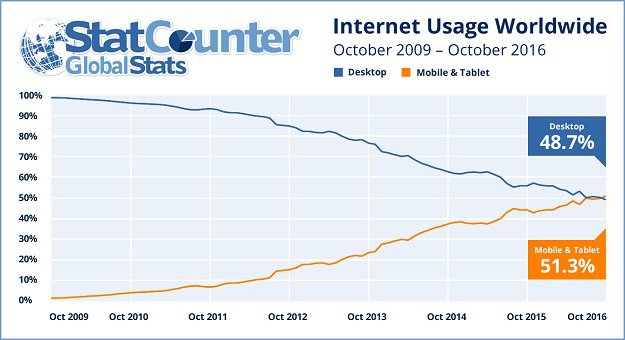 The statistic is calculated for both mobile phones and tablets, but if we decide to split tablets and mobile phones into different categories the number will change slightly.

Putting each device into it’s own category, mobile-based web visits would account for 46.53% of traffic while tablet-based traffic would account for 4.73% of web traffic. By the statistic presented by StatCounter it is very true to say that internet usage is on the verge of being dominated by smartphones.

Also the usage rate for individual countries differs a lot. For example, the data reflect that in the UK, desktop internet usage was set at 55.6 percent and mobile accounted for just 44.4 percent. However in a country like US, the desktop drove 58 percent of internet usage in October, while smartphones and tablets were responsible for 42 percent. 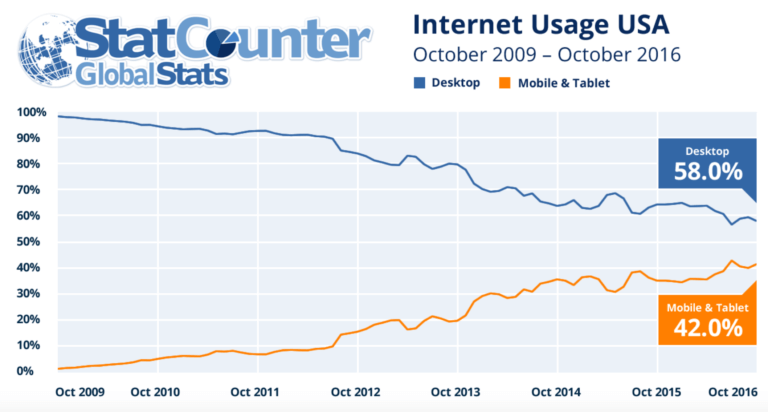 “This should be a wake-up call especially for small businesses, sole traders, and professionals to make sure that their websites are mobile friendly,” said Aodhan Cullen, StatCounter CEO.

“”Mobile compatibility is increasingly important not just because of growing traffic but because Google favours mobile friendly websites for its mobile search results.””

Last year October similar thing happened to Google search as mobile overtook the desktop for searches where it averaged 100 billion searches a month.

To make it easier for businesses to embrace the movement to mobile search, Google decided to introduce a free online tool in June called Test My Site, this amazing tool tests how good or poor a website is for mobile devices and then provides recommendations on what to fix.

Google also annouced in October that it would break out a mobile-only search index that promises to deliver more up-to-date results to smartphones than the ones it provides to desktop users.

According to reports from Search Engine Land, the mobile internet will be Google’s primary index with the change expected to happen in the upcoming months.