Contents hide
1 The term “Computer Virus ” scares all computer users. Computer virus are known to cause a lot of damages to the computer and sometimes important files get unrecoverable. It can damage victims privacy, can access private files and can even corrupt the very precious data which includes photos, videos, saved passwords etc.
2 2) SQL Slammer
3 3) Zeus
4 4. Conficker
5 5) Code Red
6 6. Melissa
7 7) Morris Worm
8 Like this:

The term “Computer Virus ” scares all computer users.  Computer virus are known to cause a lot of damages to the computer and sometimes important files get unrecoverable. It can damage victims privacy, can access private files and can even corrupt the very precious data which includes photos, videos, saved passwords etc.

Many International companies have lost billions of dollars due to the effect of computer virus on their systems and data, computer viruses are mostly used by hackers to cause damages or steal vital information.

We decided to take a walk back in history and take a look at viruses that has caused  widespread destruction. The following are the 7 deadliest computer virus ever created in Mankind history!

1) The First and Foremost is  – ILOVEYOU 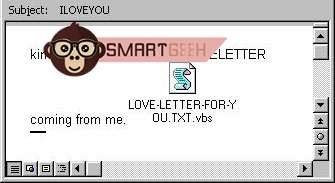 Also known as Loveletter and The Love Bug, this was a Visual Basic script with an ingenious and irresistible hook: the promise of love. On May 3, 2000, the ILOVEYOU worm was first detected in Hong Kong. The bug was transmitted via e-mail with the subject line “ILOVEYOU” and an attachment, Love-Letter-For-You.TXT.vbs. Similar to Melissa that is the 6th on our list , the virus emailed itself to all Microsoft Outlook contacts.

The virus managed to wreck havoc on computer systems all over the world, causing damages totaling in at an estimate of $10 billion. 10% of the world’s Internet-connected computers were believed to have been infected. The government and many big companies had to go offline to prevent infection.

An interesting footnote: Because the Philippines had no laws against virus-writing at the time, the author of ILOVEYOU was not charged for this crime.

SQL Slammer is the fast-spreading computer worm that infected most of its 75,000 victims within ten minutes. SQL Slammer dramatically slowed down general internet traffic and brought down South Korea’s online capacity on Knees for 12 hours.

It caused a denial of service on some Internet hosts and dramatically slowed down general Internet traffic, starting at 05:30 UTC on January 25, 2003. It spread rapidly, infecting most of its 75,000 victims within ten minutes.

So named by Christopher J. Rouland, the CTO of ISS, Slammer was first brought to the attention of the public by Michael Bacarella. Although titled “SQL slammer worm”, the program did not use the SQL language.

It SQL Slammer mainly targeted on the servers by generating random IP addresses and discharging the worm to those IP addresses. 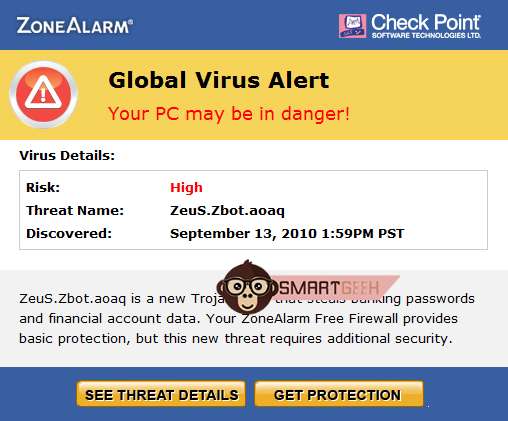 Zeus, ZeuS, or Zbot is a Trojan horse malware package that runs on versions of Microsoft Windows. While it can be used to carry out many malicious and criminal tasks, it is often used to steal banking information by man-in-the-browser keystroke logging and form grabbing.

The Trojan was first identified in 2007 and has since been reduced to remnants,  it managed to compromise thousands of FTP accounts and computers from large multinational corporations and banks such as Amazon, Oracle, Bank of America, Cisco, etc.

Controllers of the Zeus botnet used it to steal the login credentials of social network, email and banking accounts. 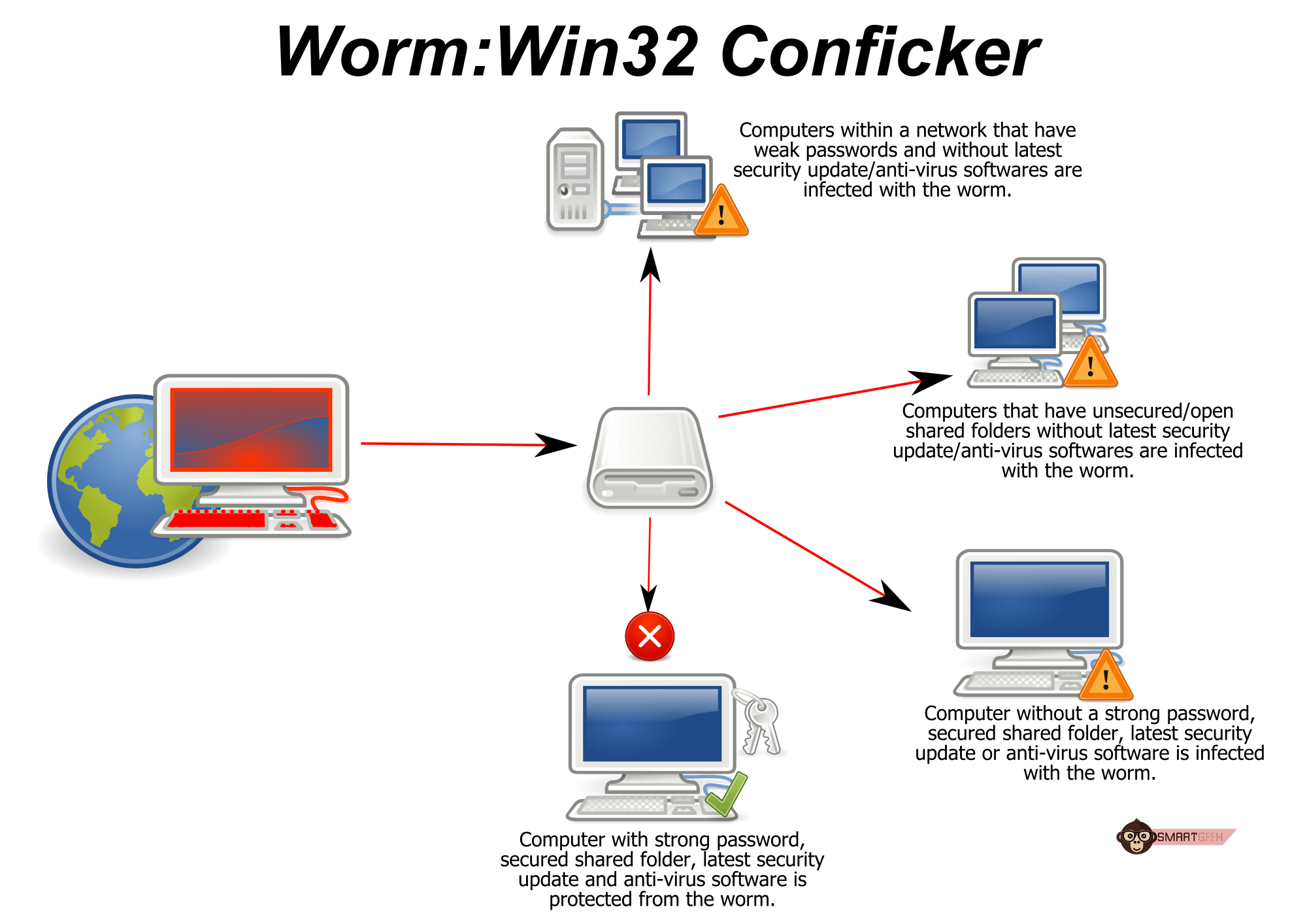 Conficker, also known as Downup, Downadup and Kido, is a computer worm targeting the Micrsoft Windows operating system that was first detected in November 2008. It uses flaws in Windows OS software and dictionary attacks on administrator passwords to propagate while forming a botnet, and has been unusually difficult to counter because of its combined use of many advanced malware techniques. The Conficker worm infected millions of computers including government, business and home computers in over 190 countries, making it the largest known computer worm infection since the 2003 Welchia.

Specialized anti-malware tools had to be created to combat Conficker and ultimately remove it from infected computers. Many systems infected with Conficker were considered lost due to control of the computer being taken over by remote attackers. 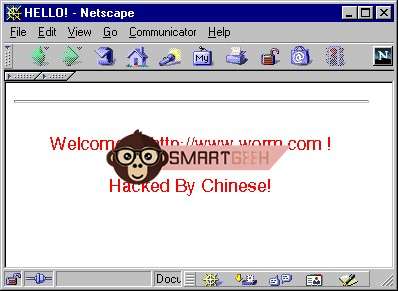 Code Red was a computer worm observed on the Internet on July 15, 2001. It attacked computers running Microsoft’s IIS web server.

Although the worm had been released on July 13, the largest group of infected computers was seen on July 19, 2001. On this day, the number of infected hosts reached 359,000.

Compared to modern malware, Code Red seems like an almost kinder, gentler version of a threat. But when it swept across computers worldwide in 2001, it caught security experts off guard. Most memorably, Code Red successfully brought down the whitehouse.gov website and forced other government agencies to temporarily take down their own public websites as well. Though later worms have since overshadowed Code Red, it’s still remembered by anti-virus experts as a turning point for malware because of its rapid spread. 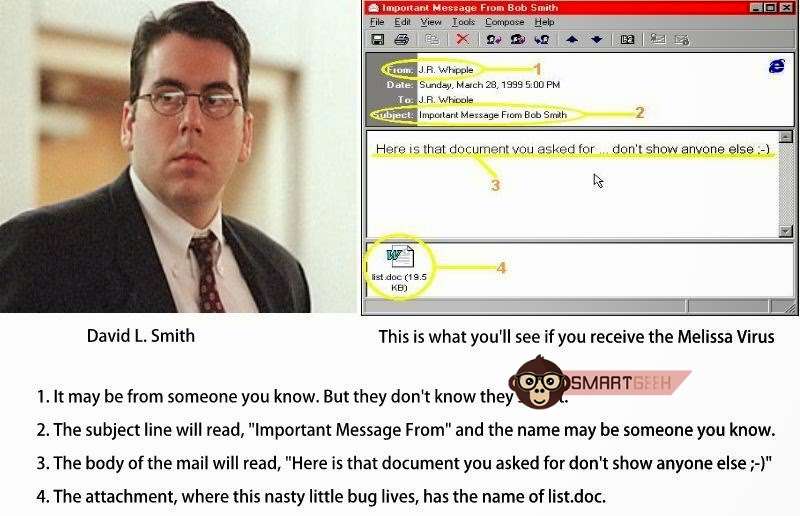 The Melissa virus, also known as “Mailissa”, “Kwyjibo”, or “Kwejeebo”, is a mass-mailing macro virus. As it is not a standalone program, it is not a worm.

In 1999, David L. Smith developed a virus called Melissa for Windows platform based on Microsoft Word macro. The program automatically spreads itself through an email attachment. Once the attachment (named list.doc) is open in MS Word or Outlook, it resends itself to first 50 contacts present in address book along with the message “Here is the document you asked for.. don’t show it to anyone else”. It doesn’t destroy any personal files or data present in hard drive but was strong enough to hang the entire network.

The virus spread quickly and it forced Microsoft corporation to shut down incoming email service. Intel and other companies were affected too. For creating Melissa, David received 20 months jail sentence and $5000 fine. 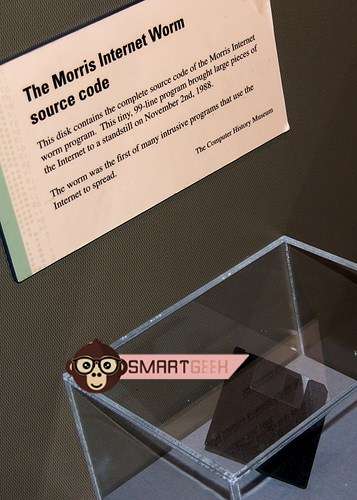 The Morris worm or Internet worm of November 2, 1988 was one of the first computer worms distributed via the Internet. It was the first to gain significant mainstream media attention. It also resulted in the first felony conviction in the US under the 1986 Computer Fraud and Abuse Act. It was written by a graduate student at Cornell University, Robert Tappan Morris, and launched on November 2, 1988 from the computer systems of the Massachusetts Institute of Technology.

If you think there is any we omitted, feel free to use to comment box to suggest, and also don’t forget to share to your friends via the social media share button. 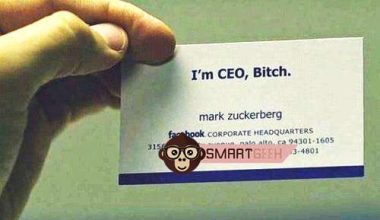 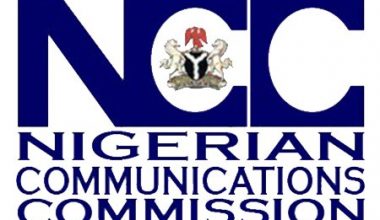 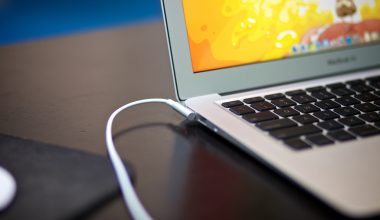 Read More
The sleekness of Apple Laptops makes it an hard choice of PC to ignore. Apple has been highly…
Read More
UUncategorized 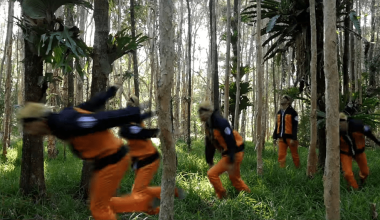 Read More
This is the best live-action video of naruto & sasuke you can find online. At first i thought,…
Read More